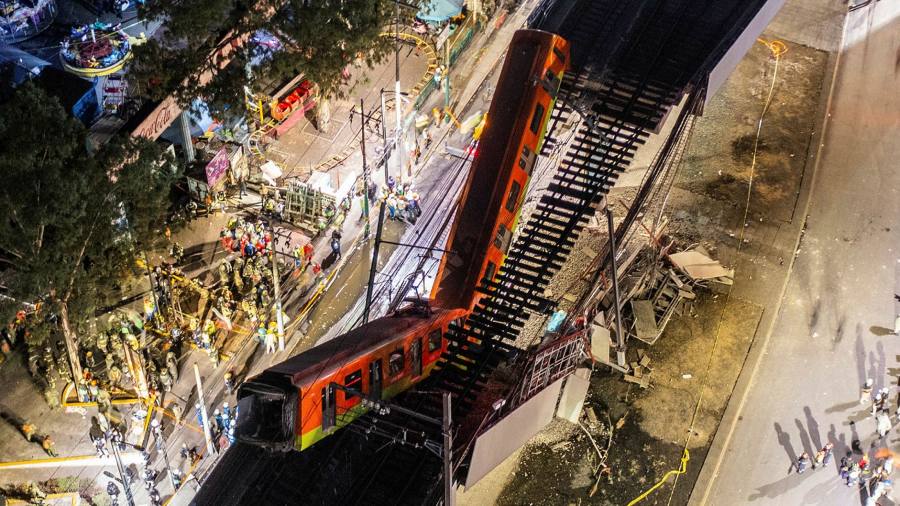 At least 24 people died, including several children, and 79 were taken to hospital when an elevated section of the Mexico City metro collapsed without warning on to a busy road late on Monday.

The collapse happened on a recently built section of line in a southeastern suburb of the capital, which has been plagued by problems, including the premature wearing on train wheels and rails, since it opened.

At least seven of the injured were in a serious condition and three were children, said mayor Claudia Sheinbaum, who rushed to the scene and surveyed the rescue operation wearing a hard hat. She told a news conference on Tuesday that four bodies were still in the train.

City security cameras captured the moment the elevated structure abruptly collapsed around 10.30pm local time, sending a passing metro train plunging on to cars and pedestrians below. Sheinbaum said a support had given way.

One survivor told Foro TV that he felt the train “brake suddenly and we were all pulled in the other direction. My cell phone flew out of my hand . . . I saw people who had fainted and were unconscious.”

Dramatic images showed the train suspended at a 45-degree angle, snapped into a V-shape, and suspended above a mountain of rubble on the road. One side of the track was still intact; the other, where the train had been travelling, had collapsed.

The accident happened near the Olivos station on Line 12 of one of the world’s busiest metro services. The elevated section was some 5m above the road and was supported by concrete pillars.

Sheinbaum told a news conference early on Tuesday that the line was maintained and checked “every day”, and that a specialist investigation, including impartial external experts, would determine what had happened. “We have to find out the truth,” she said.

Asked about people’s outrage at the tragedy, she said: “They have a right to be angry, worried, particularly with the history of Line 12. What they have, from the mayor, is a commitment to reach the truth and not to hide anything.”

The line was formally opened in 2012 by Marcelo Ebrard, the current foreign minister who was then in the final months of his term as mayor of Mexico City. Criticism of its design and construction emerged soon after Ebrard ended his term as mayor, and the state auditor’s office alleged there had been cost overruns, irregularities and shoddy work.

The line was partially closed in 2014-15 to repair what the authorities described at the time as structural faults. Four stations were also shut after a major earthquake struck the capital in 2017.

Following Monday night’s news, Ebrard promised his full assistance in the investigation of the “terrible tragedy”.

“Of course the causes should be investigated and responsibilities clarified,” he wrote on Twitter. “I am completely at the disposition of the authorities to contribute in everything which may be necessary.”

Ebrard is currently considered a frontrunner to succeed President Andrés Manuel López Obrador in elections in 2024, but Monday night’s disaster could complicate his chances. It is also likely to raise questions about whether a recent government austerity drive has resulted in cut corners and compromised public safety.

López Obrador told a news conference on Tuesday morning that “absolutely nothing will be hidden” in the investigation into the tragedy.

The line was built by a consortium including Carso, a company owned by Mexico’s richest man, Carlos Slim, as well as construction firm ICA and France’s Alstom.

Tüv said in an emailed response that it had not worked on the line since the end of 2017 and that its “activities at that time were not related to the bridge infrastructure or the structural strength of the existing structures.”

The other companies were not immediately available for comment.