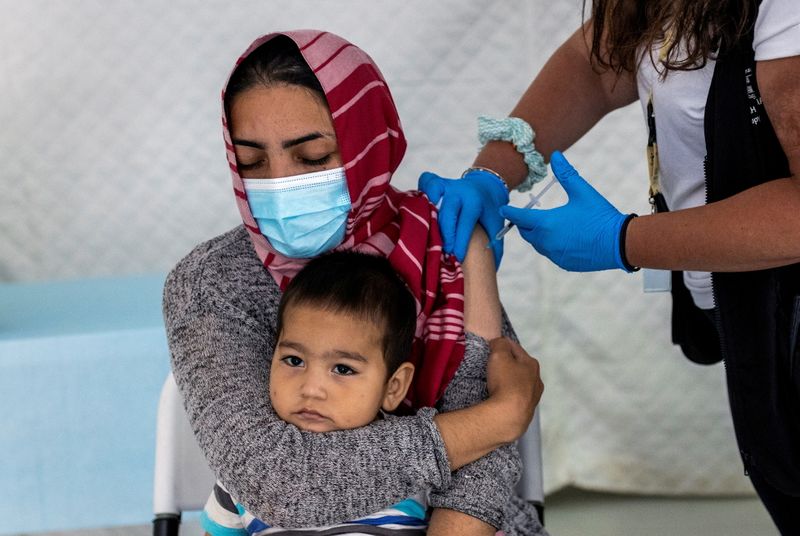 © Reuters. FILE PHOTO: A migrant holds her baby as she receives a shot of the Johnson & Johnson vaccine against the coronavirus disease (COVID-19) in the Mavrovouni camp for refugees and migrants on the island of Lesbos, Greece, June 3, 2021. REUTERS/Alkis Konstanti

CARBIS BAY, England (Reuters) – British Prime Minister Boris Johnson expects the Group of Seven to agree to donate 1 billion COVID-19 vaccine doses to poorer countries during its summit starting on Friday, and help innoculate the world by the end of next year.

Just hours after U.S. President Joe Biden vowed to supercharge the battle against the coronavirus with a donation of 500 million Pfizer (NYSE:) shots, Johnson said Britain would give at least 100 million surplus vaccines to the poorest nations.

Johnson has already called on G7 leaders to commit to vaccinate the entire world by the end of 2022 and the group is expected to pledge 1 billion doses during its three-day summit in the English seaside resort of Carbis Bay.

Some campaign groups condemned the plan as a drop in the ocean, with Oxfam estimating that nearly 4 billion people will depend on COVAX for vaccines, the programme that distributes COVID-19 shots to low and middle income countries.

“As a result of the success of the UK’s vaccine programme we are now in a position to share some of our surplus doses with those who need them,” Johnson will say on Friday, according to excerpts of the announcement released by his office.

“In doing so we will take a massive step towards beating this pandemic for good.”

COVID-19 has killed around 3.9 million people and ripped through the global economy, with infections reported in more than 210 countries and territories since the first cases were identified in China in December 2019.

While scientists have brought vaccines to market at breakneck speeds – Britain has given a first dose to 77% of its adult population and the United States 64% – they say the pandemic will only end once all countries have been vaccinated.

With a global population nearing 8 billion and most people needing two doses, if not booster shots to tackle variants as well, campaigners said the commitments marked a start but world leaders needed to go much further, and much faster.

“The G7’s aim to provide 1 billion doses should be seen as an absolute minimum, and the timeframe needs to speed up,” said Lis Wallace at anti-poverty campaign group ONE.

“We’re in a race with this virus and the longer it’s in the lead the greater the risk of new, more dangerous variants undermining global progress.”

Of the 100 million British shots, 80 million will go to the COVAX programme led by the World Health Organization (WHO) and the rest will be shared bilaterally with countries in need.

Johnson echoed Biden in calling on his fellow leaders to make similar pledges and for pharmaceutical companies to adopt the Oxford-AstraZeneca model of providing vaccines at cost for the duration of the pandemic.

Leaving poorer countries to deal with the pandemic alone risks allowing the virus to further mutate and evade vaccines. Charities have also said that logistical support will be needed to help administer large numbers of vaccines in poorer countries.

The British doses will be drawn from the stock it has already procured for its domestic programme, and will come from suppliers Oxford-AstraZeneca, Pfizer-BioNTech, Janssen, Moderna (NASDAQ:) and others.

Disclaimer: Fusion Media would like to remind you that the data contained in this website is not necessarily real-time nor accurate. All CFDs (stocks, indexes, futures) and Forex prices are not provided by exchanges but rather by market makers, and so prices may not be accurate and may differ from the actual market price, meaning prices are indicative and not appropriate for trading purposes. Therefore Fusion Media doesn`t bear any responsibility for any trading losses you might incur as a result of using this data.

Fusion Media or anyone involved with Fusion Media will not accept any liability for loss or damage as a result of reliance on the information including data, quotes, charts and buy/sell signals contained within this website. Please be fully informed regarding the risks and costs associated with trading the financial markets, it is one of the riskiest investment forms possible.

Share
Facebook
Twitter
Pinterest
WhatsApp
Previous articleState autopsy just released and most deputies are back to work after fatally shooting Andrew Brown
Next articleTaraji P. Henson To Star as Miss Hannigan in “Annie Live” this December on NBC

Here are the biggest calls on Wall Street on
Read more